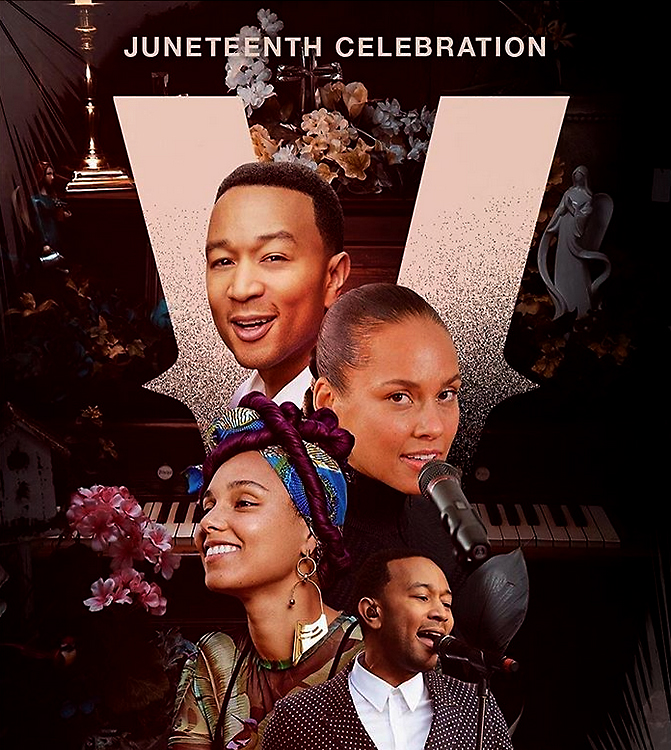 Juneteenth marks the end of the enslavement of black people across the United States. The official date is June 19, 1865, though then-President Abraham Lincoln‘s Emancipation Proclamation issued the effective date, which was some two-and-a-half years before, in 1863. The edict was met with strong resistance by enslavers.

Both Keys and Legend led the celebratory moment, playing or performing 21 songs from each of their repertoires. Before delving into competition, Keys and Legend began the set with an introductory duet of Bob Marley‘s Redemption Song.

The pianists prefaced the duel by recounting the first time they crossed paths; it was at a session working with Kanye West. Following the introduction, both musicians leaned into the Verzuz with a combination of play-out tracks and live piano-assisted performances.

ROUND 1: AK came out the gate strong with Ghetto Story Chapter 2, a reggae-dancehall track done with Jamaican deejay Baby Cham. The single is a remix of the latter’s Ghetto Story. “Big Up to Baby Cham,” Keys shouted as she danced to the music. JL responded with his first-ever appearance on a record. Legend played the piano on Everything is Everything, from Lauryn Hill‘s iconic The Miseducation of Lauryn Hill debut. “Shout out to L-Boogie,” Legend said.

ROUND 2: AK retreating to a pink piano and sing a spirited version of new release Underdog. JL responded with Selfish with Kanye and Slum Village from his laptop atop a black piano.

ROUND 3: AK plays Karma from The Diary of Alicia Keys, JL reponds with Get Lifted’s Used to Love U and shared a funny story about the first time he performed in front of Puffy and Jay-Z, who were both mentioned in the lyrics. Legend said “they were sitting next to each other” and ended up laughing about the awkwardness of the scenario.

ROUND 4: AK with Gangsta Love done with Eve. JL responded with strongly with a live performance of So High.

ROUND 5: AK drew for My Boo (with Usher.) JL played the piano and sang Ordinary People. “The day I knew I was famous, in 2005…,” Legend shared that Oprah Winfrey and Magic Johnson called him, on the same day, after the single was released and gained popularity. Legend added that the video was co-directed West.

ROUND 6: AK gave a live performance of Empire State Of Mind Part II; JL played They Say which features Common and West.

ROUND 8: AK performs Unthinkable life, Legend assists with harmonising; JL responds with Another Again on his turn.

ROUND 9: AK took the competition up a notch and soulfully belts If I Ain’t Got You live; JL answered with a stirring live performance of his wildly popular This Time (I Want it All.)

ROUND 11: AK plays A Woman’s Worth; JL pulls out Wake Up Everybody with The Roots featuring Common and Melanie Fiona

ROUND 12: AK flipped a new page with a live version of her Dairy and shared trivia about working on the track with Stokely [Williams] of Mint Condition fame. Legend then remarked “you worked with Mint Condition and Tony! Toni! Toné! on the same track?!” JL then launched into Blame Game, on which he collaborated with West.

ROUND 14: AK performed Superwoman live; JL responded with American Boy with British artiste Estelle, saying “this is one of the biggest hits I ever wrote.”

ROUND 15: AK drew for fan-favourite You Don’t Know My Name, and remarked that “the first time I worked with Kanye is this song, right here.” JL responded with another Rick Ross collaboration Rich Forever.

ROUND 16: AK launched into Unbreakable after stating that the track resulted from the “next time I worked with Ye.” JL countered with the heavyweight Green Light on which he teamed with Andre 3000.

ROUND 17: AK dropped In Common; JL pulled out an original, from his latest Bigger Love album, U Move, I Move; a charming, well-received duet with Jhene Aiko.

ROUND 18: AK could only respond with a brilliant live performance of one of her most beloved track Girl On Fire. The songwriter shared that “when girls say they sing it” to feel empowered, she feels happy and honoured. JL answered with major fire power, launching into a nuanced and delicate rendition of All Of Me.

ROUND 19: AK turned up the heat with an emotional live performance of, arguably her most recognisable recording, Fallen. Legend provided the songstress with flawless backing vocals. JL could only, next, elicit the help of Higher from DJ Khaled, featuring himself and the late Nipsey Hussle.

ROUND 20: AK had no choice but to up the ante with the reggae-infused No One, prompting JL to dip into his Oscar-winner bag for Glory, which, once again, teamed the crooner with long-time collaborator Common.

ROUND 21: A round that featured new tracks from both songwriters followed. AK rounded out her set with social commentary from Perfect Way to Die. JL also stuck to the theme, changing his first-choice closing song to, according to him, the more suitable Never Break, from his just-released album.

“We are greatness,” Keys said at the end of the historic piano-driven Juneteenth Verzuz, before Legend added “We love you, God bless you all.”

DJ D-Nice followed with an after party set. The Verzuz brand is owned by Swizz Beatz and Timbaland.

It’s Flingback Friday with #SeanPaul who a show unno how fi do di #temperaturechallenge ting!