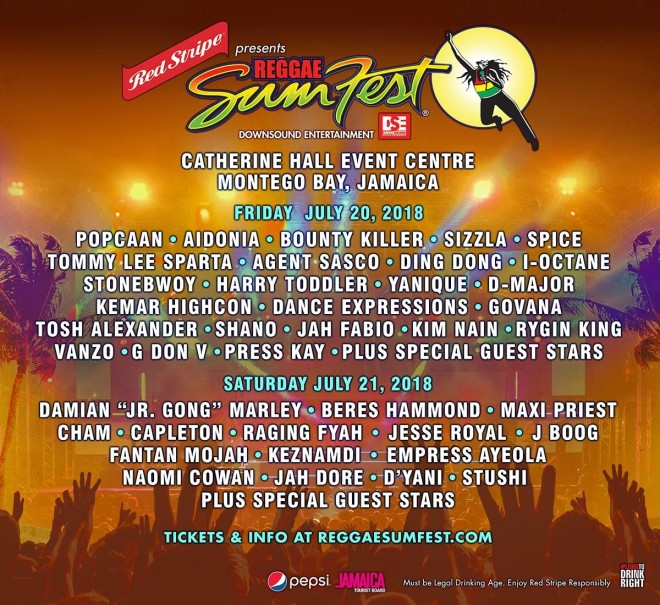 For over a quarter of a century as the Caribbean’s largest long-standing music festival, Reggae Sumfest returns to Montego Bay, Jamaica with a heavy-hitting artist lineup featuring the world’s top reggae and dancehall artists.

Reggae Sumfest’s week-long takeover begins Sun. July 15, 2018 with a variety of action-packed pre-parties and events before the climax of the 2-day music festival. Below is a list of the festivities.

The Blitz “All Black” Party

Please visit www.reggaesumfest.com to purchase tickets and for most up-to-date information.

Sumfest has earned a reputation as the Caribbean’s premier music festival showcasing Jamaica’s indigenous music as well as many other popular global genres of music. Now in its 26th year, the world’s greatest reggae music festival continues to pay homage to the musical genre that originated in Jamaica and has become a global phenomenon. Sumfest continues to add unprecedented value to “Brand Jamaica” by promoting two of the country’s most valuable products – the music and the island itself as a tourist destination. Since its inception, Sumfest has made Montego Bay and the surrounding areas a prime summer destination for visitors and locals alike who flock to the city to enjoy some of the best talent in Reggae, Dancehall, Hip Hop and R&B. Over the years, Sumfest has partnered with a number of major local and international brands. Our goal is to continue these long-standing partnerships and develop ways to enhance their relationship with Sumfest to drive incremental value for their brands. Sumfest is owned by Joseph Bogdanovich and produced by his company DownSound Entertainment.