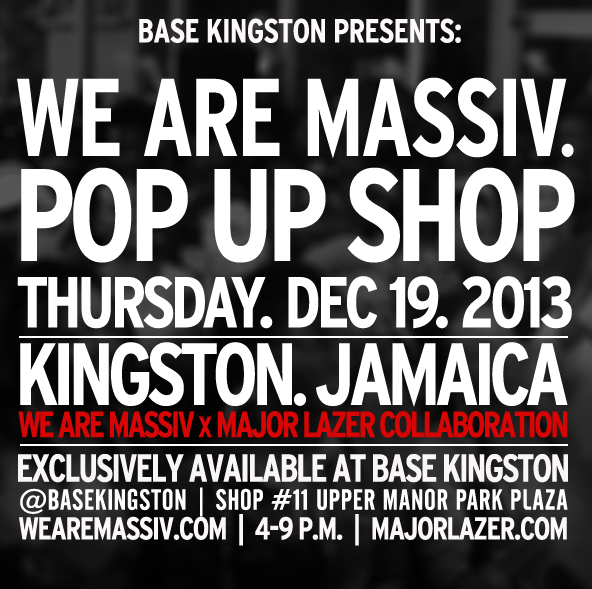 We Are Massiv. Returns To Base Kingston For Another Pop Up Shop Feat. An Exclusive Collaboration With Major Lazer

On Thursday December, 19, 2013, from 4pm – 9pm, lifestyle brand We Are Massiv returns to Kingston, Jamaica for another Pop Up Shop but this time featuring an exclusive collaboration with electronic Dancehall, DJ project Major Lazer.

“After the success of the first Pop Up Shop with Live From Kingston, Jamaicans grew hungry for another one, With the timing of the Major Lazer & Skrillex show and the collaboration Massiv, it makes for the perfect time to Pop Up again at Base Kingston”, says Jason Panton, Co-Owner of Base Kingston and longtime contributor with We Are Massiv.

“Major Lazer was one of the first and longest running supporters of our brand, so it was only a matter of time that we collaborate … and what better than a show in Jamaica” says Nathan Amar – Founder and Creative Director of We Are Massiv.

Fans of the brand can expect an awesome collaboration with Major Lazer called ‘No Bad Mind’ as well as a debut of limited amount of pieces from We Are Massiv’s ‘M.’ collection, Major Lazer’s Walshy Fire and Jillionaire will also be at the Pop Up Shop.

Base Kingston located at Shop #11 Upper Manor Park Plaza is the first retail outlet for We Are Massiv and is the only retail location for the clothing line in Jamaica.